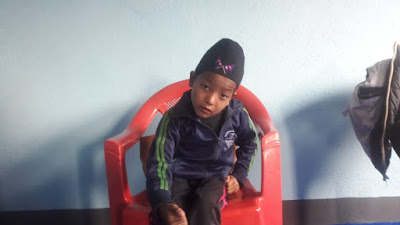 Suman Aarupate, 9 yrs old boy from Pipalkot, Dailekh was admitted to ADC in Falgun 8th ,2074 with the chief complain: unable to walk. He was brought in ADC by his aunt so we don’t know his pre, peri and post- natal history.

On observation, he had ectomorphic body built with normal facial grimace. He had drooling from his mouth with athetoid posture. He has normal hearing and vision but impaired speech. On examination, he had increased tone in bilateral UE and LE (Grade I in Modified Ashworth's scale) with athetosis. He had exaggerated  reflex in Biceps, Triceps, Knee and ankle with positive plantar reflex. He had persistant ATNR reflex. He has good head control, rolling, creeping and crawling, sitting and ability to change position but unable to stand and walk. He had good sitting balance but need moderate support in toileting, eating and dressing. He plays purposefully. For him our anticipated goals were to make his trunk control able to stand, walk, and make him able to play to play skillfully. NDT approach, AROM ex, Spasticity reduction techniques, functional exercises and play therapy were the treatments given for him.


What we achieved in 3 months??

He was able to stand within 1 month. With basic speech therapy, drooling was stopped. He started walking inside room since 2 months of treatment session. Now he is able to walk and come to ADC from home with minimal support. He has good trunk control with good sitting and standing balance. He can play with different toys.

Suman is trying to walk

Thank You for following us.